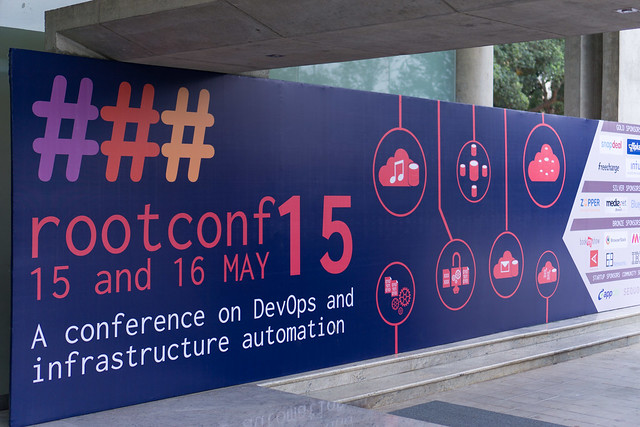 Last month, May 15-16, there was Rootconf in Bangalore. Rootconf is a premier conference for devops and system administrators. The highlights of this Rootconf were SaltStack, RancherOS, Project Atomic, PostgreSQL, etc. We also had Fedora presence in the conference. 3 Fedora ambassadors: Aditya Patawari, Praveen Kumar and myself were present at the event. We distributed Fedora 21 workstation DVDs at the registration desk and announced about FUDCON Pune, 2015 as well.

Day 1 started with Abhishek Kona speaking on why and how they rewrote parse.com for scale. This was followed by Introduction to SaltStack by Mike Place. Then, after tea break, Anand Chitipothu spoke on 10 reasons why you should prefer PostgreSQL to MySQL.
This was followed by Akbar speaking on how LinkedIn is leveraging kafka for log aggregation and monitoring. After lunch, I attended Aditya Patawari's talk on running containers in a sane environment Project Atomic: OSTree, Cockpit, Kubernetes. Then, there was this awesome talk on how http://www.savetheinternet.in/ handled scale with low tech.

The day started with Bernd Erk Icinga over Nagios. This was followed by Shanker speaking on running microservices on Docker at scale using RancherOS. I gotta say this, Rancher has done an awesome job in giving a sleek and user friendly UI for managing Docker cluster. Atin Mukherjee from Red Hat speaking on managing distributed file system.

Then there were flash talks where people shared about cool stuffs they work on. Praveen Kumar spoke on Jenkins job builder. Praveen also announced about FUDCON Pune, 2015 during his flask talk. Pooja Shah from Goibibo spoke on how she scales QA at Goibibo. Rezy from Red Hat spoke about different buzz words in devops/sysadmin over a period of time.

Then we headed towards the Cloud BOF where sysadmins and devops discussing about the status quo of cloud infrastructures, orchestratotion and related stuffs. 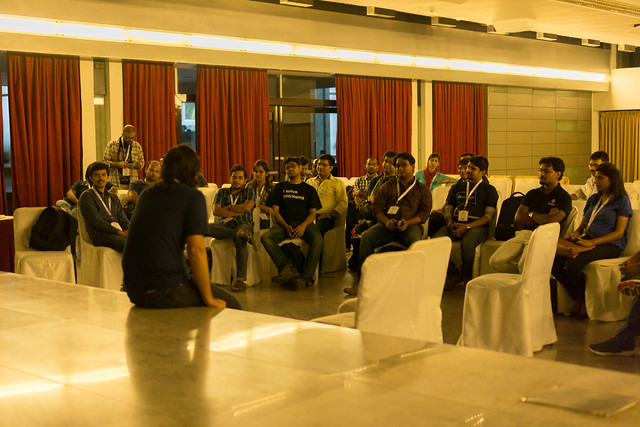 Rootconf has always been an awesome event, and this year was no different. I met with loads of awesome folks in the event, got to learn a lot of new stuffs from them and made new friends. I also clicked some pics during the event.

We again met at Starbucks Coffee, Indiranagar on May 2, 2015 at 6 PM for our monthly Fedora meetup in Bangalore. Like the meetup in the month of April, there were only 2